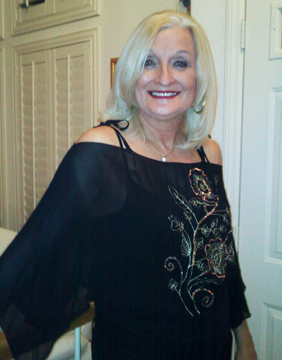 After many years of negative experiences with Reptilians and Greys, I moved to Las Vegas in 1989. One night everything changed when I had my first encounter with a positive Reptilian.  It came into my bedroom while my husband was out of town. He came to me as a silhouette of light in the darkness of my room, wearing a dark cloak covering his head. The first few times he came it was just to take me aboard ship and teach me. I don’t remember much and all the communication was telepathic.

One night I was finally able to see him: I woke up from what I thought was a dream with a feeling of my kundalini rising.  In my dream he was a blond-haired, blue-eyed man. I saw him there so I knew it wasn’t a dream. He was standing there in the energy field as he had been many other nights. I said, “I know you are not this blond man, you are something else.  What do you really look like?” He said, “Are you sure you are ready for this?” I said yes. Then the energy around him changed and he showed me his true form, or I finally got comfortable enough with his energy that I was able to see him in his true form.

There stood a 7’5” or taller handsome regal Reptilian being. I was startled at first but I felt the unconditional love that came from him and felt no fear, only love. He had an avocado greenish color to his body which was covered by scales. He had piercing but kind yellow eyes. His body structure was very muscular and he had some type of armor on his chest. I think it was organic and part of his body. He wore a black cloak but I could see that his hands had four fingers with long claw like nails. He did not speak but spoke to me telepathically. I know he was some type of an ambassador because he spoke so eloquently. 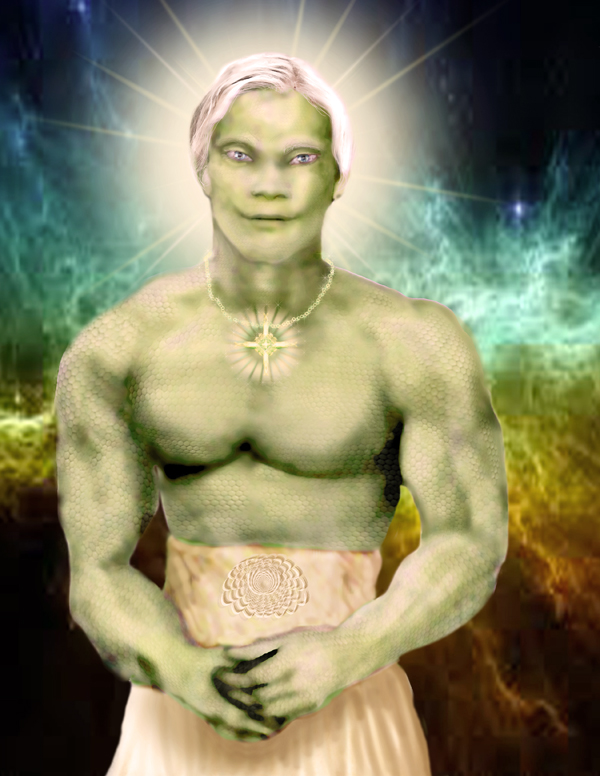 That night he told me what his name was. I heard Iyano in my head. I experienced his unconditional love many more times. Such a different energy and feeling, compared to the other Reptilian encounters. He never touched me and there was never any kind of physical relationship. It was all an unconditionally loving, spiritual energy connection. Iyano was to come to me for many years throughout this period of my life. I realized we had a love connection and I found out we had been through at least three incarnations together. He came back many times. One time I was taken on board to the nursery. I had been taken many times before to love and bond with my children. I have been shown that I have 13 hybrid children.

That night there was a child shown to me that looked different than the rest of my children, who I felt were Grey and human genetics like the Essassani.   This time a child came from the back of the room and walked closer to me. It was a Reptilian child. He seemed more stocky than my other children. His skin was light green with a hint of scales and his forehead came into a v shape coming down between his eyes. His eyes were blue green and he had such a sweet loving energy. I felt a special deep love for him. I asked who was the father and they told me, “You call him Iyano and the all.” I took that to mean that Iyano and other genetics were used to make my baby. I remember when I was carrying this one, unusual things happened in my body. I even developed a scale rash on my back and leg but when he was taken from me the rash disappeared. That was in the early 1990s.

Here he is as a baby and grown up as he is now. I think it is the same child but I’m not sure. These experiences are confusing.

I am so blessed by all of these things that happened to me in my life. I have learned so much from my life experiences, even the negative ones, that I would never change any of them. It has made me a better person. I learned so much from Iyano and the Federation. We truly are spiritual beings living a human life.

I guess I was taking care of some karma. Because of all my experiences, I understand and have empathy and compassion for so many who have experienced the same things. It has all helped me to be a loving and a non-judgmental facilitator for my support groups which I have been conducting for 15 years.

Connect with Miesha by email, join her experiencer calls and explore her website!