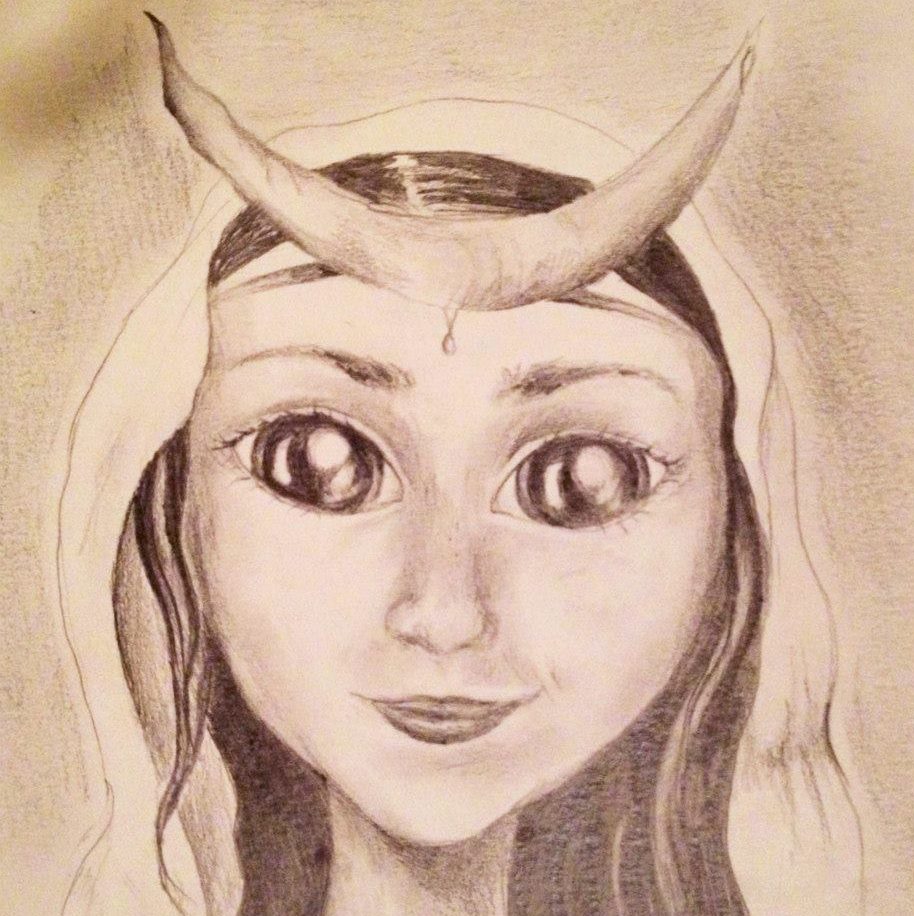 There she is… Lilly Luna, striking and fierce, staring me straight in the face. I was looking at my own reflection in a mirror and she was me and simultaneously she was Miss Luna. She was glowing and sparkling with light, gazing at me wearing her silky smooth white hooded robe.  The kids say so much with their raw radiant gazes. They know who they are and that soul blueprint is always instantly telempathically seared into my heart.

There was a new energy about her in this engagement. There was a mythical majesty to her stance, and her head adornment enhanced her already wildly piercing presence. She had a crescent shaped horn, shaped like a bowl ready to receive crowning her head. Then I awoke… puzzled and taken by my dream-time reflection.

I was staying at a fellow hybrid parent’s house on my tour up the West Coast towards Shasta. We’d been chatting about the effectiveness of playing with a psychomanteum [the act of gazing into a mirror that’s reflecting a blank wall which becomes a contact portal to reflect beings in other dimensions]. The company around the dinner table agreed~ we’d like to try this method more often.

A few days prior, visiting my fellow California galactic ambassadors, I was playing with Aluna and Itom. Being in their clear and rich archetypal energies made it obvious how the Greys geniusly applied that frequency to their hybrid kids.  I wondered what my dominant archetypal energies were… Each hybrid kid embodies all universal energies and plays out specific ones with such purity, precision and play. Humans sheepishly dance around these defining characteristics while the hybrids radiate and utilize their powers. I wanted to explore mine and learn from the kids…

This was the 2nd time Lilly had come to me so strongly in regards to visiting Shasta. She’d come through Bashar in a private session, earlier this year, giving me the encrypted message “Purple Poppies” which I translated into visiting Mount Shasta, a journey I’d been pushing aside for many months (click here to read about round 1 with Lilly Luna). This time she visited again, the night before I arrived in Shasta… She was letting me know she was with me and that I’m on the right track…

The other message I got after looking through a Tarot deck the morning after the dream was her archetypal message to me. The symbol of the crescent moon almost always accompanies the high priestess.

“The high priestess sits between the end and the beginning, intuitively understanding that change is a constant with or without one’s involvement or influence… The [Crescent] Moon at her feet represents a foundation of the unconscious as the primary influence (remembering that unconscious is UP in frequency and direction in the 9 levels of consciousness)” – Keen, Traditionally the intuition was pictured at one’s feet, possibly a lower energy. Lilly showed me the moon at her crown chakra, saying to utilize my 3rd eye and the energy of Shasta (the crown) to navigate and be guided.

“She is is the feminine archetype who sits as guardian and as a veil (the bridge) between the conscious energy of the magician and the inner self.  She holds the secrets of the subconscious realms that are seldom brought to the surface in daily life. The High Priestess shares her feminine energy with the empress who represents woman’s role as mother and wife, but she represents the mysterious and unknown aspect of the feminine principle.” –Infinite Visions Tarot, The High Priestess mediates and intuitively perceives “the veil” — bridging between our higher selves, the ETs and other realities, and Earth.  Then the merging of the two realities (3d + 5d) through the alchemy of the Magician.

“The High Priestess is also known as Persephone, Isis, the Corn Maiden and Artemis. She sits at the gate before the great Mystery, as indicated by the Tree of Life in the background. She sits between the darkness and the light, represented by the pillars of Solomon’s temple, which suggests it is she who is the mediator of the passage into the depth of reality.” – Biddy Tarot

Our understanding of archetypes is understood through a human filter and their power has been subdued and pushed into the shadow over time, especially in regard to The Tarot.  Archetypal energy is universal, it is magnificent~ it’s up to us as humans to ignite these energies with new meaning~ redefining them back into their original creator energy.

I’ve always resonated with the High Priestess archetype, but after almost every spiritual female I’ve ever met says she was a high priestess in Egypt it became an uninspiring path for me 😉 No wonder Egypt was so successful, millions of high priestesses to levitate the stones, haha…  I digress.

The kids are always very multi-dimensional in their rhymes, message and symbols. In this instance Lilly was showing me one of my dominant archetypal energies and the one that was relevant for my trip to Mount Shasta, the crown chakra of the world. The significance of this place to me is the meeting place of the high council… The place where humans step into their roles as ascended masters and physicalize Christ Consciousness~ it’s the place of St. Germain, “ancient” Lemuria and a dimensional gate to receive the powerfully light information for earth.

As the sign says when you enter the town of Shasta: “Where heaven meets Earth.”  Now is the time to physicalize and live the concepts of Christ Consciousness in every way possible with NO limits~ living with pure unconditional love.

I envision this the way Eshakani [and other galactic civilizations] live it where everyone is married to everyone… And everyone is each other’s mother, father, son or daughter. Where we live as the one and express our individual gifts and unique essence!

On our trip up, we synchronistically arrived unplanned within the same hour of our friends from Sedona.  We’re the ones that came together for this first council meeting to set this standard for ourselves ~ leading from our hearts and embodying the principles we’ve conceptually perused in spirituality for so long. The physical take-away from the meeting is that we’re joining together to purchase our first property to begin living in contact community in high frequency places… living in paradox~ even if the amount of land is small (at first), the impact will be big.

The fascinating thing about the divine meeting is that ETs didn’t come up… this was about us as humans being our true selves! Only then can we welcome our galactic family and children!

A few days later I visited Panther Meadow on Mount Shasta, the place where Lilly had sent me before during the winter via the purple poppy riddle-driven adventure. During this warm and lush fall visit I got to experience what she was so excited to share with me… I was transported to my childhood by being near the delicate moss, the baby pine trees and the babbling brook. I was in my true natural state~ my magical childlike wondrous essence that thrives in the inter-dimensional land of fairies. I do play with this energy from time to time, but I don’t get swept away in its rapture and majesty.  I cried in the meadow as the little light fragments of myself came flying back into my heart.

In agreeing to participate in cities, school, work, money and mainstream culture I had lost the best of me… the true me. I embrace my time in that world to learn what I don’t prefer and acknowledge the world I chose to transform and shift from.  Sitting in the sprouting grass and wildflowers I knew there was no going back because I’m dedicated to the part of me that can only be alive supported by a new world of harmony and integration.

Lilly was showing me that there is no in-between.  There is a distinct and drastic line between the world where she lives and my current Earth. She’s not crossing the line into our tragedy… she can only usher and guide me to her world of mystery and light.  The funny thing is we don’t have to cross a raging river or a treacherous cliff… the shift into the hybrid children’s world is but a delicate step across the trickling stream and a soft whisper of sparkles to our radiant hearts.